Bob Davis' "The Dream is Real'' chronicles a life in broadcasting

Growing up in Hays, one of Jeff Bollig’s earliest memories is listening to broadcast legend Bob Davis on local radio, hanging on every word.

“I got turned on to sports by my dad, going to games and just watching things and I’d always listen to Bob,’’ Bollig said. “I kind of go back and remember those ‘69-‘70 teams and I just remember for Christmas getting a transistor radio and packs of batteries and just listening to Bob in my bed. 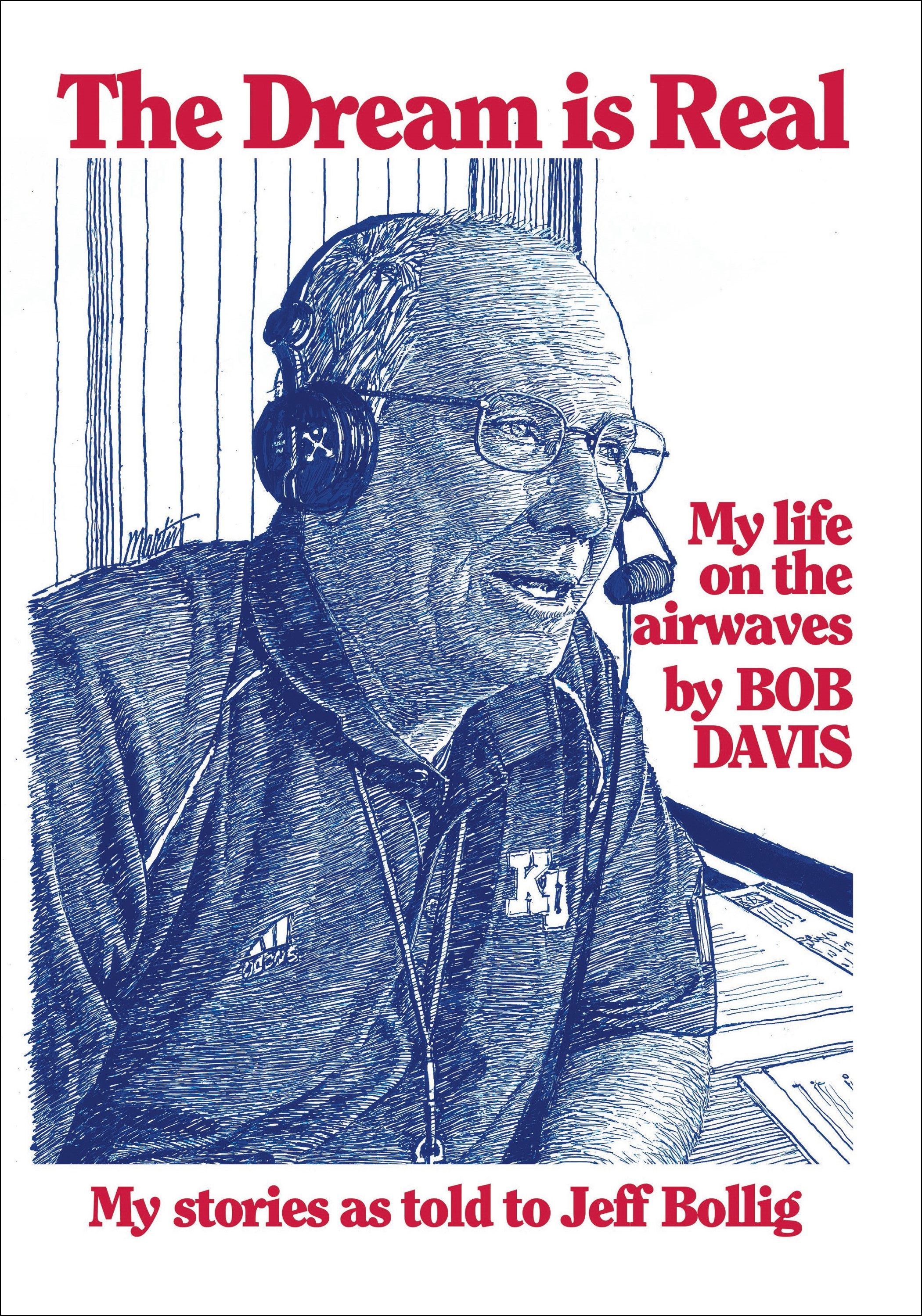 “The Dream is Real,’’ a recently-released book chronicling Bob Davis’ 48 years in broadcasting.

“The best Christmas present I got after a while was a battery charger. I just loved sports so much and Bob was so good. He did afternoon coaches shows and he did both high schools (Hays and Thomas More Prep), he did Fort Hays State. He was always on the radio and I thought he was larger than life.’’

As fate would have it, Bollig ended up following Davis, a Topeka West and Washburn graduate, to the University of Kansas, developing a close friendship that eventually led to a collaboration on “The Dream is Real,’’ a recently-released book chronicling Davis’ 48 years in broadcasting.

“The ironic thing is I never met Bob at Hays,’’ Bollig said. “I never really had the courage or the gumption to go up and introduce myself. I actually got a tour of KAYS (radio) from (Topekan) Bob Gonzales and I was too nervous to talk to Bob Davis, a legend.

“It’s kind of funny because when I went up to work at KU in Sports Information, (sports information director) Doug Vance introduced me to Bob Davis and he said, ‘Hey Bob, here’s one of your biggest fans.’ Bob looked at me like, “You were afraid to talk to me?’ ‘’

Bollig decided years ago that the story of Davis’ career, from working in Hays to being the voice of the Jayhawks and the Kansas City Royals, needed to be told, but he had to talk Davis into taking that plunge.

“He’s in charge of this whole mess, I mean project,’’ Davis joked. “Bollig got me in a headlock, and he’d been wanting to do it for quite a while, so finally I said, “OK. You really think people would want to buy this book?’ He said, ‘Oh God, we’ll sell them in Hays like crazy,’ or something along those lines. It’s done now, so we can’t turn back.’’

Once Davis began working on “The Dream is Real,’’ he found out he enjoyed the experience.

“Very much so,’’ Davis said. “(Jeff) did the work. He lined up people and we talked to them. It was a lot of memories re-visited and we touched base with some people I hadn’t talked to for awhile so I thought it was great fun.’’

The book centers around stories from Davis’ career, but also includes comments from some of the biggest names in sports about their memories of Davis, now 76.

Davis said he was humbled by the fact that so many people were willing to participate in the book project and gave Bollig credit for making that happen.

“I’ve had a chance to meet a lot of people over the years, but I don’t know what (Bolig) had on them, but maybe he had something, who knows?’’ Davis said with a chuckle. “Jeff’s just such a good guy. Who could tell him no?’’

Davis, whose son Steven is also a broadcaster, said he misses broadcasting, but knows it was probably time to take a step back from the daily rigors of the job.

“I loved doing the games, I loved going on the road trips and meeting people and the other broadcasters and so on, but I suppose it was about time,’’ he said. “I’m 76 now, so I couldn’t do the pace that I used to I don’t think -- get up at 4:30 in the morning and go in and go to work and all that stuff. But it’s been fun just to be around it.’’

Even though both Bob and his wife, Linda, are dealing with health issues, Davis, who retired after the 2015-16 KU basketball season, said he is enjoying retirement.

“I have a heart situation, an AFib, which is the 'in' thing for everybody to have now,’’ Davis cracked. “It’s an irregular heartbeat, but as a buddy of mine told me, it’s better than no heartbeat.

“We’re trucking along. I try to watch a few ballgames and follow my (four) grandchildren and what they’re up to. It’s just fun to still be around. My wife has Parkinson’s, so she’s not moving real fast and hasn’t for awhile, but we’re just trying to just move with the flow and enjoy what we have.’’

"The Dream is Real'' is available for purchase online at Amazon.com and BobDavisTheDreamIsReal.com.